Titus King has been a regular volunteer at Camp Friedenswald for the past few years. He has been involved with many facilities projects, but has also led many campers in a quite popular birdhouse-building activity. I sat down with Titus to hear his story. Here is some of the wisdom he has to share:

Titus: What I have discovered is not new. The literature is wrought with the idea that self-giving is life-giving. When I come to camp, it is part of a pattern of life that I have chosen, which I find very rewarding. I started coming to volunteer when I heard Jenna Liechty Martin talk at Central District Conference in Columbus. She talked about the Renew Friedenswald plans, and it made me think about how I was retired and had done a variety of volunteer projects. I wondered if volunteering as part of that would be possible. It was – and that got me started up here. 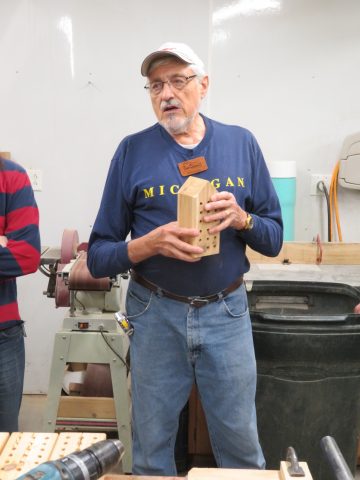 Titus demonstrating how to make a “Bee Condo”

And it was fun! Joel Schmidt, Jonathan Fridley and I took down the first boys cabin my first day here, in September 2016. We got on our way to salvage as much lumber as possible.

I did not go to church camp as a kid. The first time I went to church camp was at Little Eden Camp as a 9th grader. And my family didn’t go church family camping. But for a period of 15 years I was in living in Jackson MI, and part of a United Methodist fellowship, which had a very strong camping program. 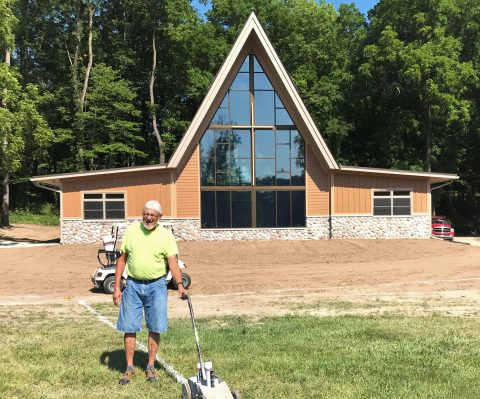 Titus painting stripes on the field outside the chapel

During this period I was asked to be a camp counselor for a senior high camp. I did that for a couple of years, and then I worked with a church pastor who wanted to share the directorship of the week-long camp. I was the Dean of that week for a couple of years, in the 1980s. This was north of Gaylord, MI on Thumb Lake – it was a camp called Lake Louise. My boys worked their way up through the camping system until they got old enough to go to high school camp.

The model there was different from Camp Friedenswald. Unlike here where there is a permanent staff, Lake Louise would have busloads come in and they would be from a certain district (like Albion District) and we would have met throughout the year to have planned the week. And we were in charge of our own programming. Of course we all had our own traditions.

Because of this experience, I realized how important camp can be in terms of spiritual development. This was part of why I was attracted to the idea of volunteering at Camp Friedenswald- not to mention the outdoors, which is a big deal for me too.

I was thinking about significant days up here, and like I said, one was when we took apart the boys cabin and salvaged the wood – that fits into the ethos of my entire life of Reduce, Reuse, Recycle. Later, I also spent one entire day doing a waste audit with Amy Huser, which was a very significant day.

I appreciate the effort of the camp to think about Creation Care. And it’s so much fun to eat up here, because I KNOW that I can put things in the compost, and they will actually get composted. It’s the same thing that happens at home.

I grew up on a farm, and learned certain basic skills from my father. That’s what I’ve used a lot in my retirement years. Our farm was in central Pennsylvania – I was a farm kid, and a PK [Pastor’s Kid], my father was a Mennonite pastor in a rural community. Consequently, I spent a lot of time outdoors, and that’s still important to me as well.

On Birdhouses and Teaching

One project I have done several times with campers at Friedenswald is building birdhouses. It’s been exciting to work with campers and families to build the birdhouses. I saw that photo in the last newsletter – 14 High School kids with their birdhouses – I had no idea how much interest there would be at that level. We also made some houses at Men’s Retreat, where some people said they would like to see them stay here at camp. So those are just about to go up. 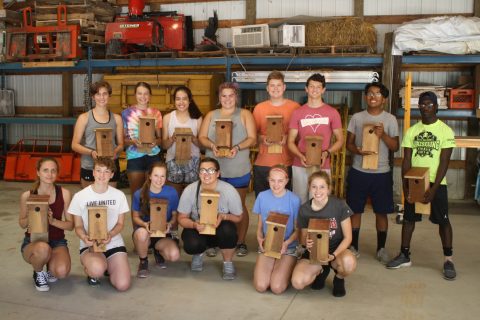 High School Campers with their birdhouses.

A lot of the wood we use is reclaimed. A long time ago, in 1990, I was the General Contractor for building a house. The house was clad in cedar boards, and of course there was extra lumber – lots of scraps. I took the time to put those in boxes – I wanted to use that for building bird houses and bat houses. I brought the wood scraps up to camp and the process started.

For many years, I was a teacher. I was teaching US history, and we had a building principal who decided we would move toward team teaching. As that developed it was determined that the four core teachers would offer electives as well. One class I ended up with was the Birds, Bats and Bees Class, where the students got to build birdhouses and bat houses. So that’s a part of my motivation, to teach basic skills about how to use one’s hands and do something with tools. Repairing is something that I like to teach too. If building a birdhouse, learn how to correct instead of use a whole new piece of wood. 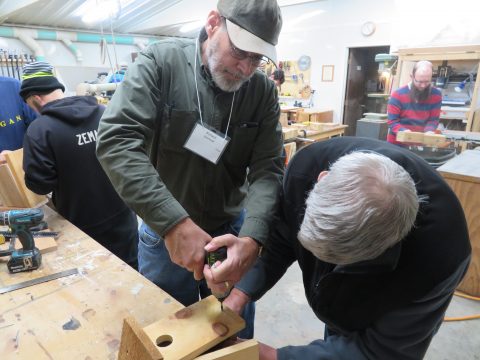 Men work together to build a birdhouse

Here is another thing I want to say – I come here, I spend a day and I go home. And during the time I am here it is an affirming time, because this is an affirming community. And that means a lot. I spend a certain amount of time in God’s big world. I always liked the Irish description of how Nature is God’s big book, and the Bible is God’s little book. And so it is always meaningful to come here. It is an affirming place with lots of meaningful work. That is really important too.

I think the collaboration on woodworking has been a big thing for me throughout the last few years. When I stayed for Men’s Retreat, it was enjoyable sleeping in a bunk where the wood had gone through machines with my hands pushing it. It gives you sense of accomplishment, or satisfaction in your work.

On Other Volunteering Projects

In the 1990s, I was invited to come teach English in a 4-week program along the Baltic Sea in Lithuania. That included a week of preparation and 4 weeks with students. It was high adrenaline and really rewarding. I have always enjoyed the mechanics of language. I went to Bethany Christian High School, and I can remember each of the teachers I had for English class. I remember German as well. So language and using language was important to me.
I went back to Lithuania in the summer of 2017 with my wife, who worked with a woman from British Columbia to transform a bolt of cloth into fitted sheets for all of the beds for the dormitory. I did a variety of things to finish the construction process so students could come.

I have also worked significantly with Mennonite Disaster Service in Detroit, Saipan, Florida, and other locations.