My next volunteer spotlight subject is Katelyn Nussbaum. Katelyn is a long-time camp supporter and volunteer. She is an elementary school teacher in Goshen, IN, and is a frequent helper in the camp kitchen. I sat down with Katelyn recently to talk about her experiences at Camp Friedenswald.

Kevin Leary: Hi Katelyn, thanks for meeting with me today. To begin, do you remember the first time you visited Camp Friedenswald?

Katelyn Nussbaum: Yes. The first time I came was in Kindergarten. My immediate family came to Family Camp in the winter every year [with parents John & Becky Nussbaum, and sisters Olivia, Erin, & Amy]. I also came as a camper in the summer starting in first or second grade every year through high school. I grew up going to camp with Naomi [Graber Leary], and it was a lot of fun to go to camp by myself.

KL: When was the first time you volunteered at camp?

KN: It was soon after college. I was still living in the area, and I came up to work in the kitchen. I wanted to come back because I had worked two summers at camp on summer staff, but was unable to work a third summer. So it was right after I graduated that I came back to volunteer. 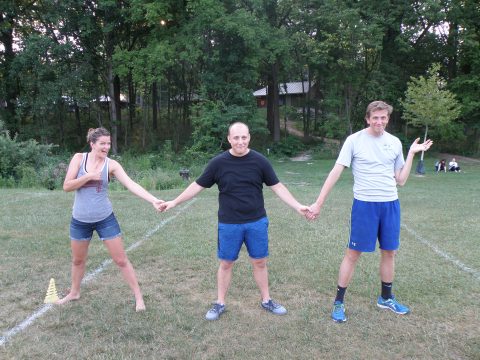 KL: When you worked on summer staff, did you get a chance to work in the kitchen?

KN: Yes! It was my second-favorite thing to do, other than counseling. Working with Ellie and Vicky in the kitchen is so much fun!

KL: Is that what you normally prefer to do when volunteering – work in the kitchen?

KN: Yes. I would say that I’m willing to do anything that is needed when volunteering, but I like to work in the kitchen because I’ve done it enough now that Ellie and Vicky feel like they can just hand me things and I will know what to do. You can go and work and do your own thing for a while. It’s just a lot of fun to work with them!

KL: Do you have a favorite meal or food item to prepare?

KN: Most of the time I’m there we make kid’s food like chicken tenders. I think my favorite is when Ellie and Vicky make their Costa Rican meal. When you are working there, you always get to sample the food at various points along the way. It’s always delicious. That would be my favorite food to eat at camp, but I also love death bars and grasshopper pie – those would be my top desserts I would want to make. When I’m allowed to make desserts, those are usually two of the ones that get made! 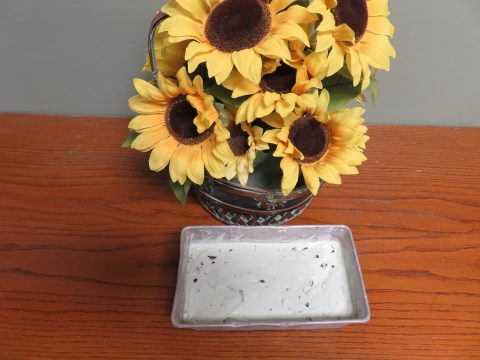 A camp classic – but how do they get the grasshoppers in there? Ask Katelyn.

KL: Either in the kitchen, or otherwise, what was the hardest project that you ever completed?

KN: That’s a great question! One of the hardest things that happened the last time I came to camp was when the gas was gone for the morning. I had to figure out how to help Ellie and Vicky make the meal without using gas – just cold foods and such. It made me realize how much camp relies on gas in the kitchen to cook things. I also came up one time when we worked on clearing brush on trails and that was pretty intense physical work. That was hard in a different sense.

KL: Are you looking forward to volunteering at camp in the near future?

KN: I would like to come up during summer camp and hopefully help out in the kitchen some. I would really work wherever – summer camp is just a fun time to be there. The summer staff is there and I get to hang out with them and relive some of the memories I had. I get to pretend like I’m 21 again. At least that’s what I did last year. 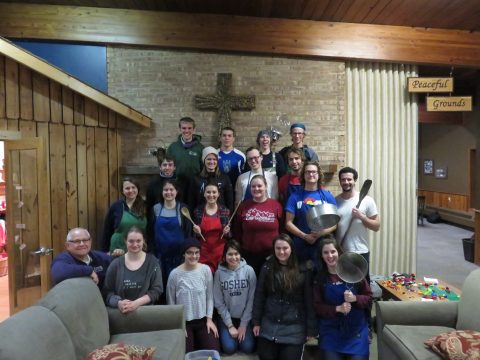 Katelyn (third row, second from left) helped out at Winter Retreats this past January.

KL: Have you volunteered at any other places?

KN: Mostly just at my church, North Goshen Mennonite, or through school opportunities. I’ve volunteered a few other places in Goshen, like helping out at the Window or at the Depot. Usually it’s just helping families around the neighborhood or something like that.

KL: Do you have any funny anecdotes from your time at camp?

KN: That could be any number of things – it feels like every time I come something funny happens. Last time it was the gas, and we spent the rest of the weekend laughing about it. Of course that was after we got the gas back. I’ve had some good memories of playing pranks on people, or staying up too late playing Euchre, screaming and laughing with other volunteers. I also remember one incident when I was on summer staff. Staff often got thrown into the lake one their birthdays, and I got carried all the way from Mosquito Hollow down to the beach and thrown in. I was very impressed that they were that dedicated to carry me all the way down – that took a lot of commitment. 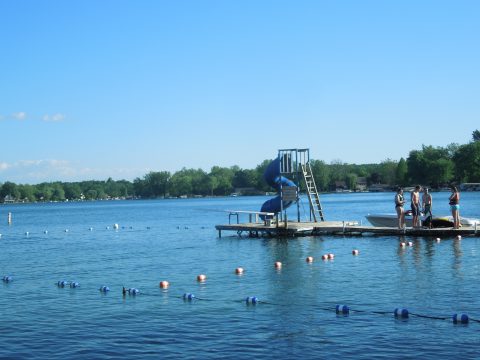 The scene of the crime.

KL: Is there anything else you would like to add to the record?

KN: I think that everyone should try to volunteer at camp if they get the chance. It’s so much fun, and if you need someone to volunteer with –let me know. I’d be glad to come up any chance I get. I’ve had a lot of fun trying to convince my cousins and siblings to work at camp – not that they have needed too much convincing! But I try to convince them that it’s worth it to spend a whole summer at camp and that you won’t regret the experience. Even just coming up for the weekend – it’s good to do something that is not just for yourself. You get to disconnect and put your phone away, and just slow down a bit. I don’t think I often get the chance to be in the moment, but I do when I’m at camp.

KN: One other good memory I have is that Ellie always gets to make the pancakes, but last time she let me make them. It was awesome! I got to use the big pancake maker and I had 25 pancakes on the griddle at one time. It was a lot of responsibility. I felt like I was on Master Chef.

KL: So how did they turn out? Were they perfectly circular?

KN: I think everybody ate them! I also learned how much I should be flipping my pancakes. Apparently I was flipping them too much because I like checking them. But Ellie told me “Don’t do that – you’ll make them flat!”

KL: I guess there is a method to the madness! Thanks for taking time out of your day to talk with me, Katelyn, and thanks for all you do for camp! Hopefully we will see you this summer.