Our next interview subjects are Joel and Teri Steinmetz from Bluffton, OH. The whole family has been great supporters of camp, including kids Jill, Jackson, Tate and Carter. I sat down with Joel and Teri recently to ask them about their experiences at Camp Friedenswald. 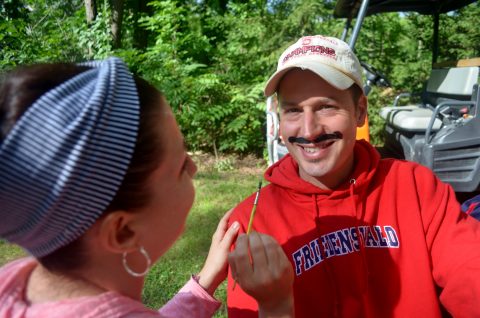 How about that mustache, Joel?

Kevin Leary: Hi Joel. Hi Teri. Thanks for meeting with me today. To begin, do you remember the first time you visited Camp Friedenswald?

Teri Steinmetz: My first time was as a freshman in high school. I got invited by a friend to come to the high school youth winter retreat. It was cold with a lot of snow. I did not enjoy having to go outside to use the bathhouse.

KL: Fair enough. What about you, Joel?

Joel Steinmetz: I think my first time was probably when I was too little to remember. My parents worked here for a period of time, and they were pretty regular about bringing us back for Family Camp. I do remember some of those early Family Camp years, hanging around outside the cabin while my parents made coffee. 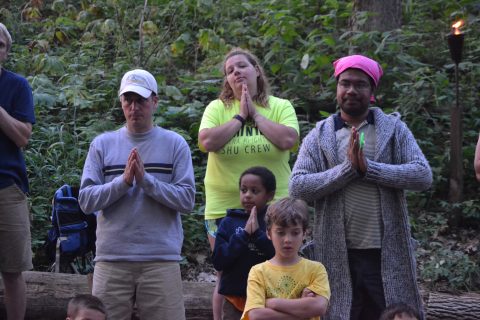 KL: It sounds like both of you have quite a long history at camp. When did you first start volunteering at camp?

JS: I volunteered first in 1994. I was in high school. Teri and I were both here the next year, and then periodically throughout the next many years. When was it that we started coming up for multiple weeks during the summer?

KL: What do you usually do those weeks in the summertime?

TS: My favorite thing is to work in the kitchen with Vicky and Ellie Solano, and I also have done office work or special projects as needed. I did my first stint as camp pastor last year – that was my first time doing anything with programming. 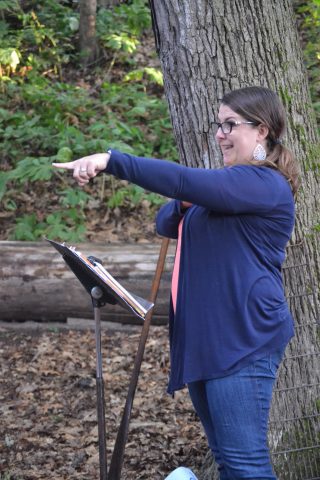 Teri calls on a camper as camp pastor for Primary Camp.

JS: I usually say that I will do whatever Jonathan (Fridley, Facilities Director) tells me to do. He is very good at having projects available for people to help out with. I always appreciate the kinds of things he has for me to do.

KL: Is there any task that you would just as soon not do?

TS: I do recall having to split and haul firewood, and I remember not being a fan. Also, staining bunk beds, which I did in high school – that was not pleasant!

JS: We are both teachers, and I think that Teri enjoys the programming stuff at camp. However I enjoy the change of pace, and appreciate the chance to work more physical labor. When I come here, if I can split and haul wood, I’m pretty happy! 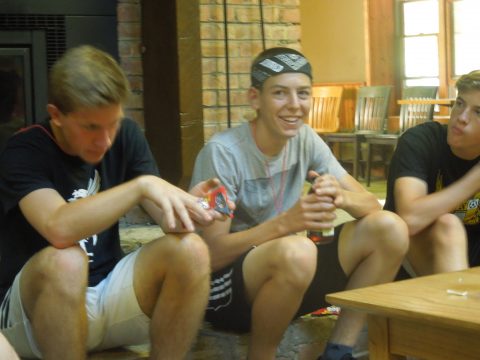 KL: What was the hardest project you have ever done at camp?

JS: Everything has been doable. Some have been physically demanding, but I wouldn’t call them hard.

TS: I think that there have been a few times I worked in the kitchen where there have been surprises, like miscounting the number of heads for dinner, and then scrambling to make stuff at the last minute. But at least that’s not my stress, because I’m not in charge. Ellie takes care of it, and I can just do the work.

JS: That’s probably the key – when you’re a volunteer, you don’t feel a whole lot of stress. It’s pretty enjoyable. 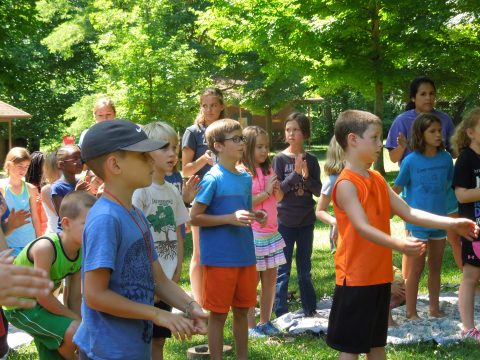 KL: Good! Are you guys planning on coming up this summer, and if so, what are some things you are looking forward to?

TS: Yes we are coming this summer, and I’m going to be the camp pastor again for the Primary Camp. I am hoping to work in the kitchen as well. I forgot to mention earlier that I have done some flower arranging during Builder’s Weekend, as well as photo designs and stuff like that.

JS: I always look forward to projects on the waterfront and making things in the wood shop. 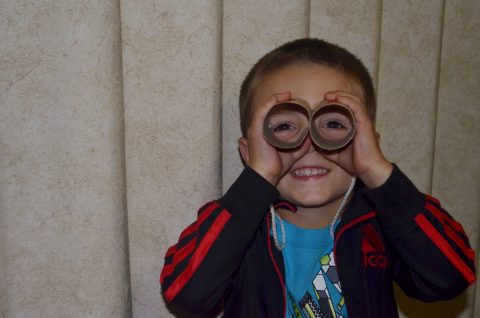 Son, Carter, can see you through his binoculars.

KL: Have you volunteered at any other locations?

TS: We have both volunteered at church in different capacities. I’ve also been on the school PTO.

JS: We’ve helped with our kids’ soccer. We had a church soccer camp.

KL: Are there any funny anecdotes or memories from your time at camp?

TS: I have had a few funny moments in the kitchen trying to speak Spanish with Ellie and Vicky where I have said funny things by accident. There was also a time where I went out for a run, and a deer jumped out of the woods right in front of me and I believe I screamed at the top of my lungs. Another time I got lost in the woods, and I was supposed to be in the kitchen, but I just could not figure out where I was. So I was very relieved when I ran into somebody, but I didn’t want to admit I was lost so I was like “Hey, can you just remind me the fastest way back?” Of course I had been really close to panicking.

JS: When Tate was 5 or 6 he had this self-appointed “Camp Security Guard” position. It was pretty funny because it was just ongoing. He never skipped a beat with that – if somebody asked how things were going he would say “I’ll check the cameras!” He always had an update to give. 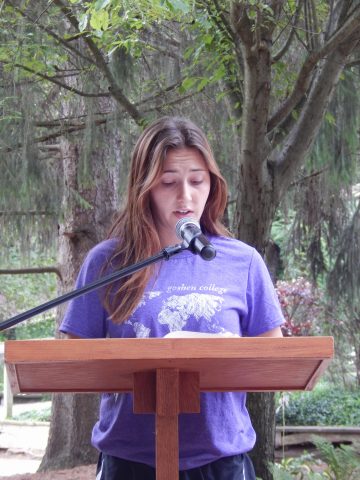 Daughter, Jill, has served on summer staff at camp.

KL: Well thank you guys for taking time out of your day to talk to me. I really appreciate it. Is there anything else that you guys want to add?

TS: Just that we love being at camp! It beats being stuck at home.

JS: You guys do a really good job at getting people into things that they would like to do.

KL: I can’t wait to see you both and your family up here this summer. See you then!

Editor’s Note: The whole Steinmetz family has been great help at camp for a number of years. Jill has served on Summer Staff, and Jackson has also volunteered as a counselor during the summer. Teri even filled in as an interim Administrative Assistant in 2014. They have been wonderful supporters of camp’s mission, and we love them dearly!