If you come to Camp Friedenswald on a Thursday and stop by the office, you are likely to see two volunteers hard at work. Dave and Marlene Suter are dedicated volunteers and supporters of Camp Friedenswald. I sat down with them recently to discuss their long history at camp.

Kevin Leary: Thank you both for speaking with me today. Do you remember the first time you visited camp?

Dave Suter: I do – it was probably 1950. I was here with my dad who was helping build the first cabins on the boys’ side.

KL: Okay, so at the very beginning?

DS: Right. I also remember when there were other cabins being built over on the girls’ side and we slept in a cabin on cots.

KL: What about you, Marlene? Do you remember the first time you visited camp?

Marlene Suter: Yes – it was with our church (Community Mennonite Church of Markham, IL) when we had a retreat up there, probably in the early ‘70s. 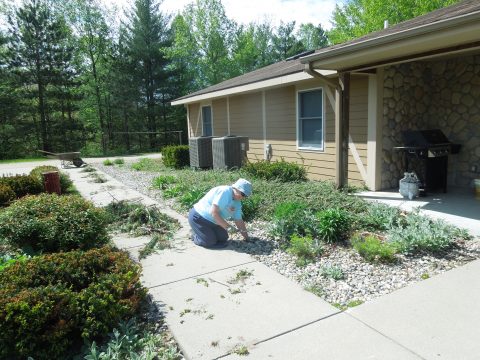 KL: When did you start volunteering at camp?

MS: That would have been in 2001. We had both retired at that time. We decided that it was time to do some volunteering at camp, and it worked out with our schedules. We were still living in Markham, IL, but we also had a cottage in Michigan. We would come to the cottage for a couple days and then volunteer at camp for a few days, and then go home. That was our routine for a couple years. We would come every week.

KL: There at the beginning, what kinds of tasks did you work on when you volunteered?

MS: I was helping the bookkeeper at that time. I did statistical analysis, and also did some gardening early on.

DS: We did a lot of office work too. Early on, I got involved with the computers. I remember ordering computers, a laminator, and some other things. There was nobody really in charge of the computers in the office, so that fell on me. We did not have anybody we contracted with at that point. 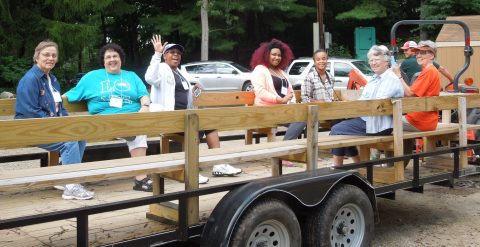 KL: Sounds like a lot of organizing work and office work. More recently, what have you been involved with?

MS: We have done inventory in camp store, as well as organizing the supplies in there. Dave, you have been doing some clean-up of the database.

DS: Yes, we’ve been switching over to another database system and there is a lot of cleanup required!

KL: What is the hardest project that you can remember working on at camp?

MS: Dave would probably say it’s the weeding! You don’t like weeding. I used to not mind it. That and doing dishes – that is a lot of work.

KL: Have you volunteered at any other locations?

MS: Yes. In the wintertime we go to Florida where we have volunteered at Habitat for Humanity, and also at an organization called ECHO.

DS: ECHO is an ecumenical Christian organization that has different types of habitats you might find throughout the world, like a rainforest. They also have a seed bank – and they have people who send seeds throughout the world. In fact, I believe Mennonite Central Committee has had some connection with that program.

MS: We have done some of the farm work there, and more recently we have done office work too, doing data entry like we do here. Also mailings and other such tasks.

DS: We worked at Habitat for Humanity for 10 years, initially doing construction, but after the housing market collapsed they would buy existing houses to rehabilitate. I guess we also did some demolition.

KL: And where in Florida is this?

KL: Do you have any funny anecdotes or memories from your time at camp?

DS: There is a good story about Camp Amigo. Does camp still have a security guard here at night?

DS: Well apparently we did, and there were some people from Amigo who decided to come to Friedenswald to scare the staff. But they got caught by the security guard. So of course it was a big embarrassment for the guys who got caught. That was years ago! 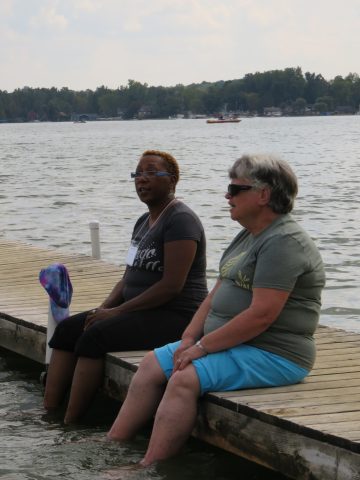 A relaxing day at the beach.

MS: Yes. That was a while ago. When we first started, we would come for a short time, so we felt like we needed to work hard to make the most of our time. One day one of the staff stopped in the middle of the morning to say “Let’s play some Dutch Blitz for a while!” So we sat on the floor and played Dutch Blitz instead of working. Of course I have also come to Women’s Retreat for years and years. There was always some funny events happening at Women’s Retreat – especially when the raccoons came in to join us in the chapel service for worship one evening! 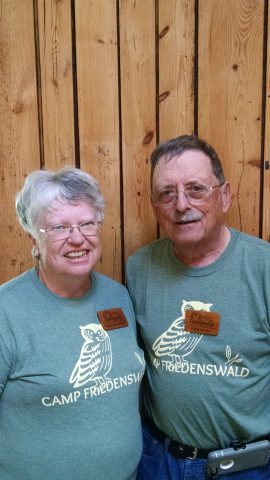 Marlene and Dave in their matching camp shirts.

KL: Very good! Well thank you guys for taking time to talk to me. Is there anything else you want to put on the record?

MS: I think volunteering at camp has been good for us because it has been a regular thing for a number of years. When we were working, we did not have the time to volunteer anywhere. Once we retired it was nice to have things that give meaning and purpose.

KL: What did you do for a career?

DS: I worked for the federal Medicare program.

MS: I worked at a daycare and senior citizens building. 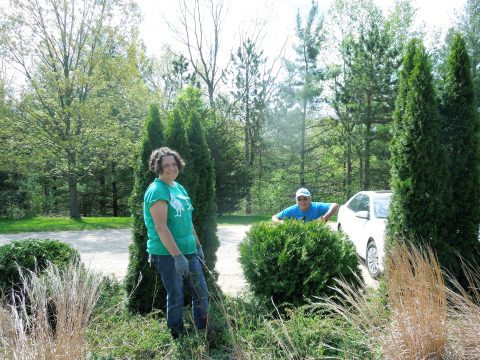 KL: Well, again – Thanks for taking time to talk to me. I am sure you have loads more stories to share, but that is where we will have to end it. See you next week!